ROSEMARY LOW
About My Life
​I have been passionately involved with birds since I was five years old. It was a pet duck that I pushed around in a doll’s pram! As a child I kept and bred Budgerigars. At the age of 16 I was given my first parrot, a Grey, sent to me from Nigeria by my cousin who was living there. 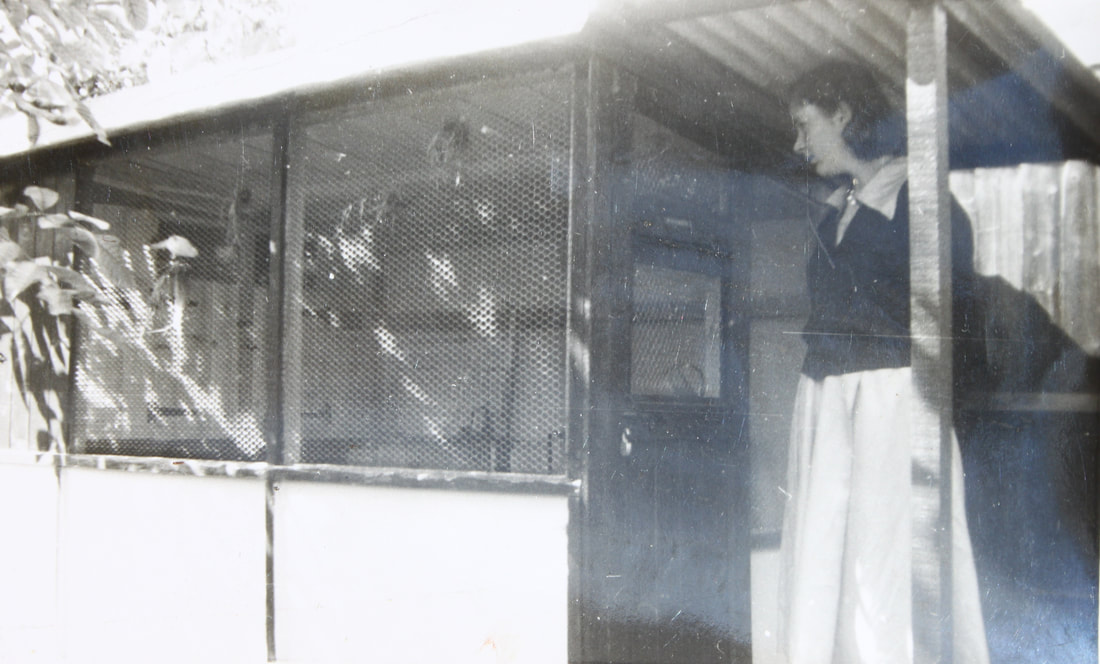 ​With my very first aviary - - for Budgies
​However, it was the neotropical parrots and the nectar-feeding species, the lories, that became my special interest. The Parrots of South America was published before I was 30, and my two works on lories (published in 1977 and 1998) became the definitive works on these birds.

When I left school I worked at the Bank of England in the Dividends Department -- the most undemanding employment of my life! In my twenties and thirties I had a very enjoyable job working in Fleet Street for the weekly magazine Cage & Aviary Birds. As a sub-editor and reporter I met many people in the world of birds and ultimately became deputy editor. I left to move to Somerset in 1985 and for two years practised free-lance bird-related journalism. As a professional writer, I have had hundreds of articles published in avicultural magazines worldwide.

In February 1987 I moved to Loro Parque in Tenerife, where I had more than 200 parrot species in my care. During nearly eight years in the Canary Islands I was curator of two of the world’s largest parrot collections, moving to Palmitos Park in Gran Canaria in 1989. Very much a hands-on curator, I was involved in hand-rearing the young (not only parrots!), during weekends at Loro Parque and almost single-handedly at Palmitos Park. I am still grateful to the owners, Wolfgang Kiessling and Klaus Paulmann respectively, for the opportunity to learn so much at these wonderful locations. At both bird parks I was able to work with the fascinating Pesquet’s Parrot (Psittrichas fulgidus) from New Guinea which became my favourite species. 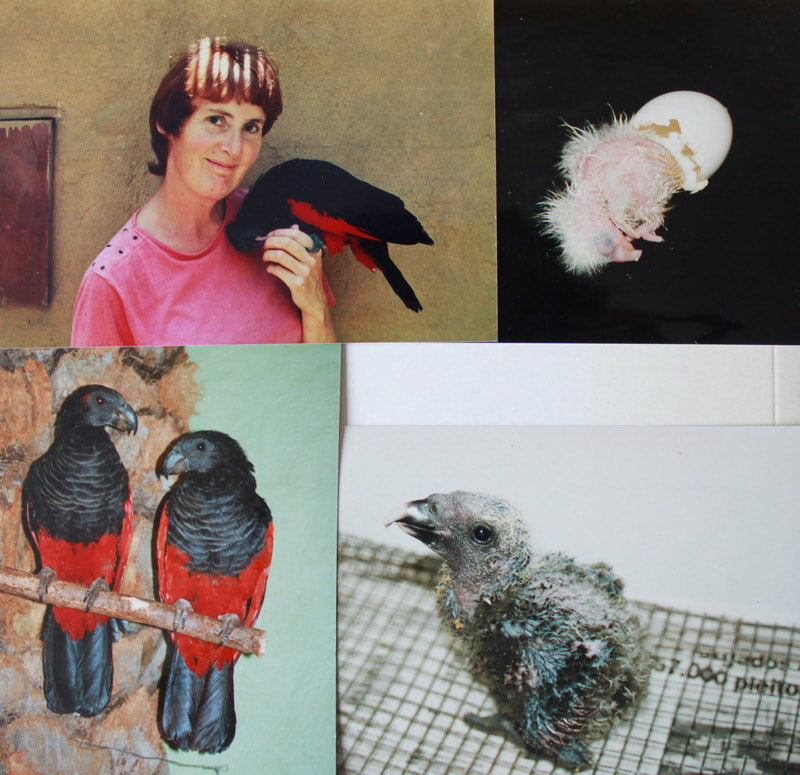 Rosemary Low with a Pesquet’s Parrot she hand-reared at Palmitos Park, 1991.
Newly hatched Pesquet’s chick 1995, the same chick at five weeks and the breeding pair. 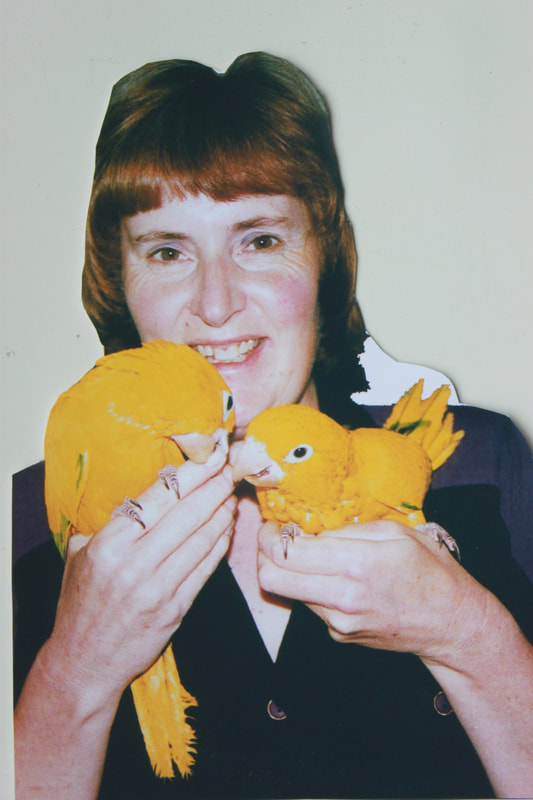 ​Rosemary with Queen of Bavaria's (Golden) Conures which she hand-reared at Palmitos Park, Gran Canaria
About my birds
​Budgerigars introduced me to bird breeding -- and I still have a great fondness for the diminutive, elegant birds that were available then -- in the 1950s. I am saddened by what fanciers have done to the exhibition Budgerigars in the ensuing years. My Budgerigar aviary was a source of great joy to me and taught me so much about the basics of rearing birds. In those days I also kept a few finches.

At that time the importation of parrots was still banned. Only Australian parakeets, Cockatiels and Ringnecks were readily available. When the ban was lifted and South American parrots were imported, I discovered the enchanting Pyrrhura conures. Breeding was not easy because no sexing methods were available and females were hard to acquire.

When lories and lorikeets became available in the late 1960s and early 1970s I completely lost my heart to them and they have dominated my aviaries ever since. Amazon parrots also captivated me but I ceased to keep and breed them when I moved back to the UK from the Canary Islands in 1995. In the 1970s until the mid-1980s I also kept and bred Pionus Parrots, Eclectus, Slender-billed Conures and cockatoos, among others. 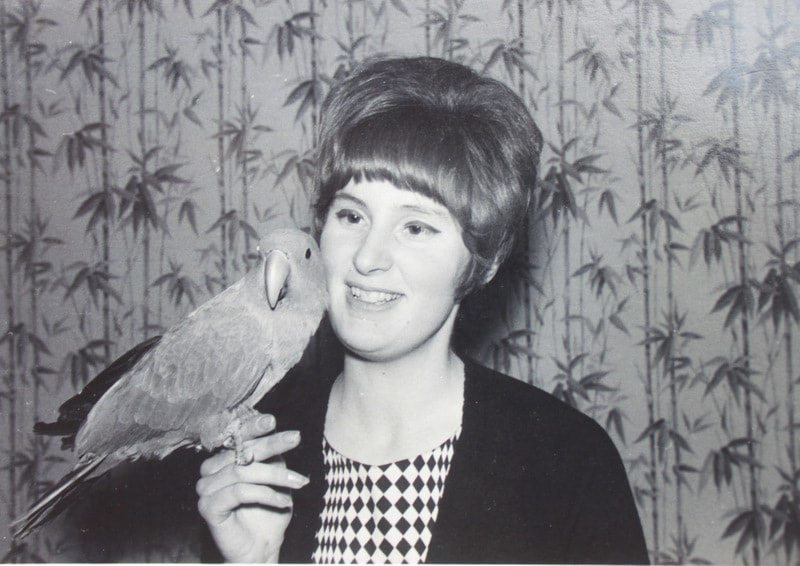 Rosemary with her male Eclectus in 1968, when Eclectus were uncommon birds in aviculture.
​Some of my birds experienced a number of moves by air over the years. They always went with me when I moved from the UK, to Tenerife, to Gran Canaria and back again to the UK. I would not know how to exist without them! Today only lories, lorikeets and Pyrrhuras grace my aviaries.
​Travel
I greatly enjoy travelling and have been fortunate to have visited the following countries for parrot related purposes -- speaking at conferences and meetings, observing parrots in the wild or as a consultant:
Wild Birds
​I am a keen observer of the birds that feed in and nest in my garden, which has a small dedicated wildlife area and plentiful trees and shrubs elsewhere. From getting to know certain individuals I have realised that their lifespan seldom exceeds two years. I despair at the human-caused incidents that cause their death or nesting failure. (Too sad to relate here.) I feed them several times daily, 365 days of the year, as I know how important the water and food I provide is to their survival. My favourites are House Sparrows, Blackbirds and Pied Wagtails. The sparrows are so cheeky, visible and active, the Blackbirds often tame and delighting me with their beautiful song and the wagtails are extremely elegant. One became so tame he would follow me around the garden rather than wait for the waxmoth larvae. One sparrow arrives at my back door, perching on the handle and looking in, when his chicks hatch -- waiting for mealworms.

I do not have a car so seldom have birdwatching opportunities within the UK -- but there are enough birds to keep me interested in my garden, thanks to the extent of ground cover, regular provision of food and four bathing/drinking places. (This is in contrast to the barren gardens of my neighbours.)

I make up a food that I call wild bird crumble that is relished by many species, especially pied wagtails and starlings.

I place a cupful of each of the following in a food blender: peanuts, digestive biscuits and flour. This is blended, then I cut up lard from the fridge (easier when it is hard) and add this to make a crumbly but quite fatty mixture. Dried mealworms can also be added. 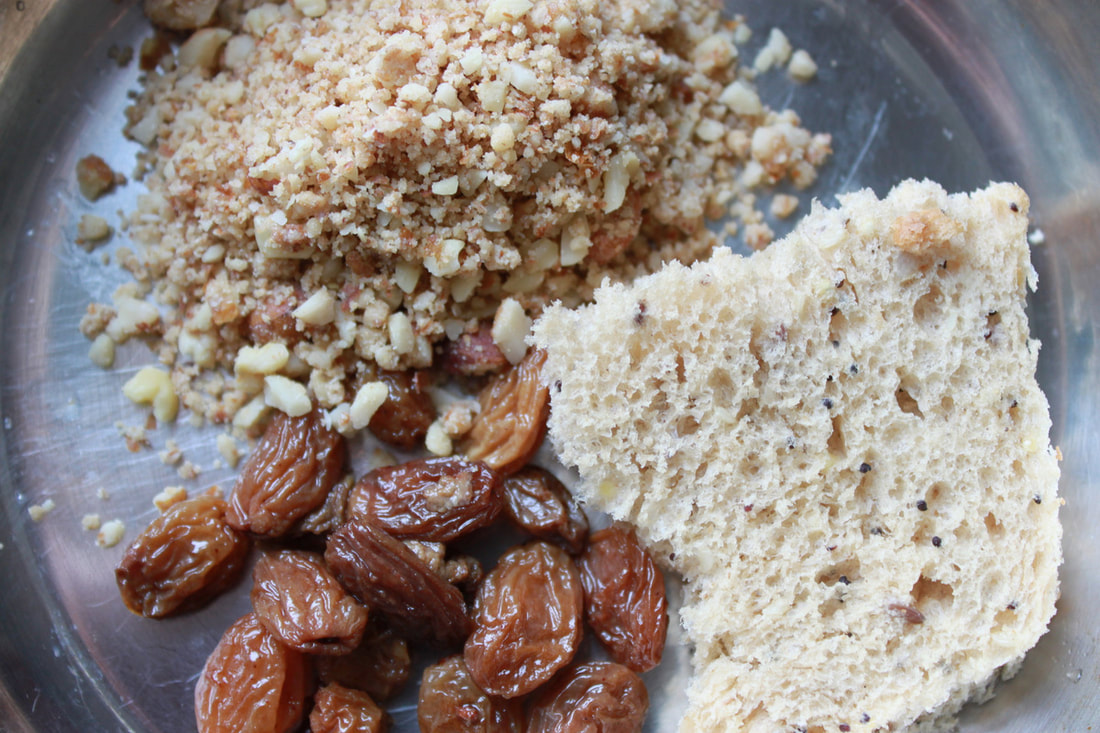 Soaked sultanas, wild bird crumble and seeded batch bread. ​
​Soaked sultanas are fed on occasions and moistened seeded batch bread. These foods are a lifeline to many wild birds in cold weather, and when few insects are available. Obviously it is much more expensive to provide than bread -- and also more nutritious. They all love it!
Photography
​A keen photographer for 40 years, my books and articles are illustrated mainly with my own photographs (Canon Eos cameras). An exception is that of some parrots in the field. I do not carry a lens higher than 300mm (too heavy). I still have a huge library (about 15,000 35mm slides) of parrot photographs dating back to the 1970s -- now obsolete except sometimes as a reference source!
Conservation
Since raising money for the conservation of the Imperial Parrot at the first Loro Parque Convention in 1986 (and installing a collection box in the park) I have been involved in raising funds for many conservation projects, mainly for parrots and habitat in South and Central America. This is a theme in which I have a deep interest and great concern and the topic of a number of papers I have read at various conventions and meetings. 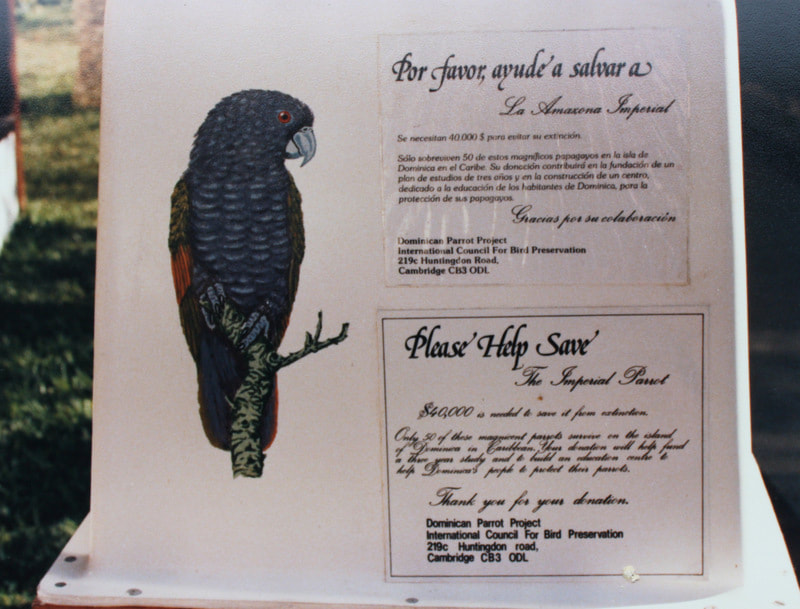 ​Collection box at Loro Parque 1989
​I was a founder member of The World Parrot Trust in 1989 and edited its magazine PsittaScene from that date until 2002.

The ongoing destruction of wildlife habitats worldwide is sadly, a sign of how out of touch with nature the majority of people are, and that politicians value economic growth above the preservation of the natural world. Through my writing I have been able to raise sums for conservation, not only with direct donations but also by encouraging readers to donate to certain projects. For example, more than $10,000 was raised in 2002 as a result of appeals I made in various magazines to save the Great Green Macaw in Costa Rica. Nearly £2000 has been raised at the annual lory meetings I have organised since 2005. I firmly believe that parrot keepers should make more effort to support parrot conservation projects.